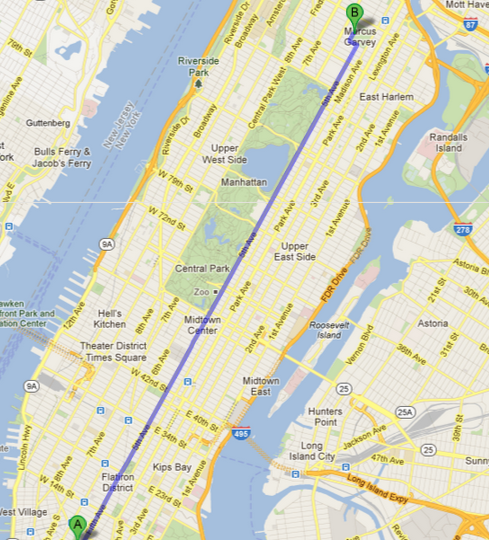 Great cities are designed to create positive energy flows in the pursuit of prosperity and tranquility.   Ancient Egypt had several focal points of spiritual alignment and energy flow, none more powerful than the Avenue of the Sphinxes that connects the Temples of Luxor and Karnak.  Paris reverberates along its Historical Axis beginning at Notre Dame, enhanced by the eclectic mix of architectures at the Louvre, pierced by the Luxor Obelisk on Place de la Concorde, and graced by the great arches stretching from the Arc de Triomphe du Carrousel to La Defense.  And one only needs to breathe and gaze to experience the Feng Shui walking the grand alignments of Beijing’s Forbidden City.  Like so many of the great cities of the world, does New York have its own grand axis of alignment and energy flow?

There has been much debate on the degree of design and planning that went into the creation of the Manhattan grid. To some historians, the grid design was a rushed, uninspired draft with rectangular units stretching northward for miles, only the crooked stretch of Broadway breaking this relentless surrender to commerce.  So quickly was this design approved that there was barely a thought for an integrated placement of parks, except for the vast openness of Central Park after nearly sixty blocks of merciless grid.

But are these naysayers realistic in thinking that the blueprint for what would become the most dynamic island in the world was just a lazy design, a fortuitous accident?   No, there surely were powerful geometric principles built into the design that directs its energy flow, influenced by the placement of important monuments and buildings.  With greater contemplation of its shape and ratios, we will find this energy flow centered along the grand axis of Fifth Avenue, New York's Champs-Elysees and Avenue of the Sphinxes, an energy flow released by geometry and the strategic placement of standing and flowing water,  gardens and greenery, buildings, monuments, and light.

It doesn't matter whether we start this journey north or south as long as we follow its trajectory.  Our journey through consciousness is up and down a spiral that extends from the quantum center of our brain through whatever expanse we can imagine, and back again.   The power of the Fibonacci sequence, the progression where the sum of two numbers in a sequence is always in the same proportion to the number preceding it, creates these spirals that are so evident throughout nature and human experience.  These geometries, colors, sounds, and light effects help us to acquire advanced synesthesia, the blending/crossing of the senses in scientifically applied proportions. As vision, hearing, tasting, smelling, touch and intellectual stimulation merge, our sensorium expands exponentially and becomes wavelike.  I chose today to start at the upper end of Fifth Avenue at 88th Street, where the avenue cuts a path between the Central Park Reservoir and the Guggenheim Museum.
​ 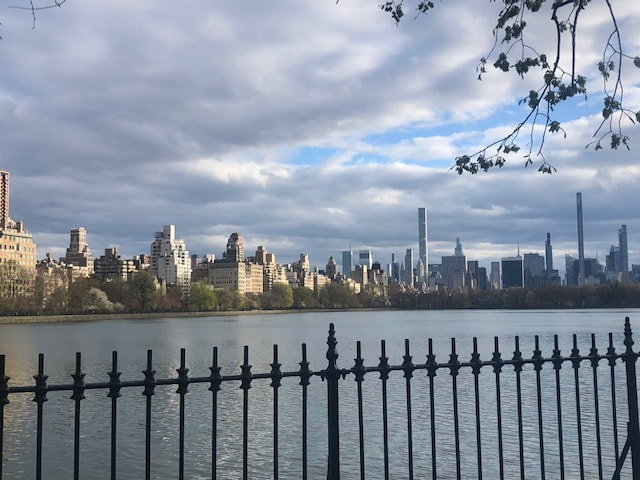 No longer an active reservoir now that the city's water supply flows more evenly and predictably from the northern counties, the Central Park Jacqueline Onassis Reservoir bestows the city a hefty dose of Feng Shui.  While water continually flows under the earth, its presence at the surface combines with other elements to enhance spiritual power.  Years after being rendered obsolete, the reservoir remains an essential fixture on the urban landscape.  Surely the builders of the Guggenheim were attracted to building near this precious body of water, as were those who placed the Metropolitan Museum a few blocks south.

The focal point of the Guggenheim is a reverse ziggurat, a topsy-turvey version of the spiraling towers of Babylon and other ancient cities.  Its spiraling staircase ascends through the entire building, its geometric power discernible from the outside as well as the inside.  The eccentric architect of the Guggenheim, Frank Lloyd Wright, envisioned the building as a temple to art.  While standing at any level of the staircase, one can see where one has been and where one is going.   If we try, we can consider ourselves in the realm of the quantum wave/particle duality, less an individual of flesh and blood and more as a wave of potentialities.
​ 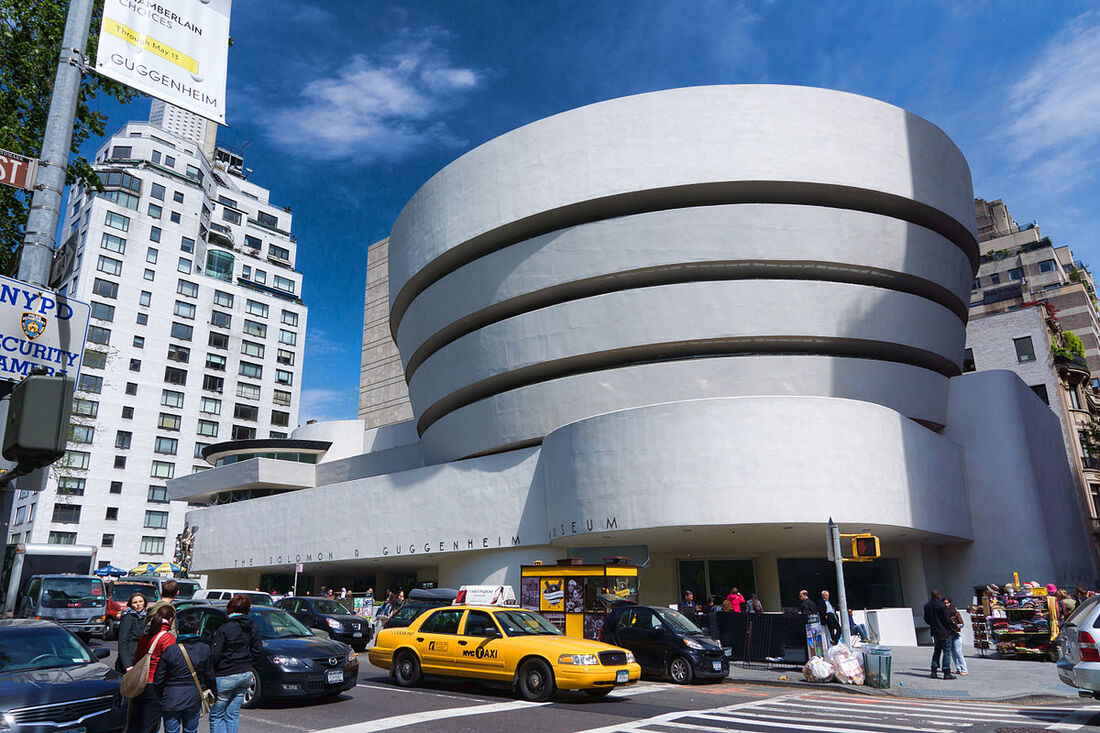 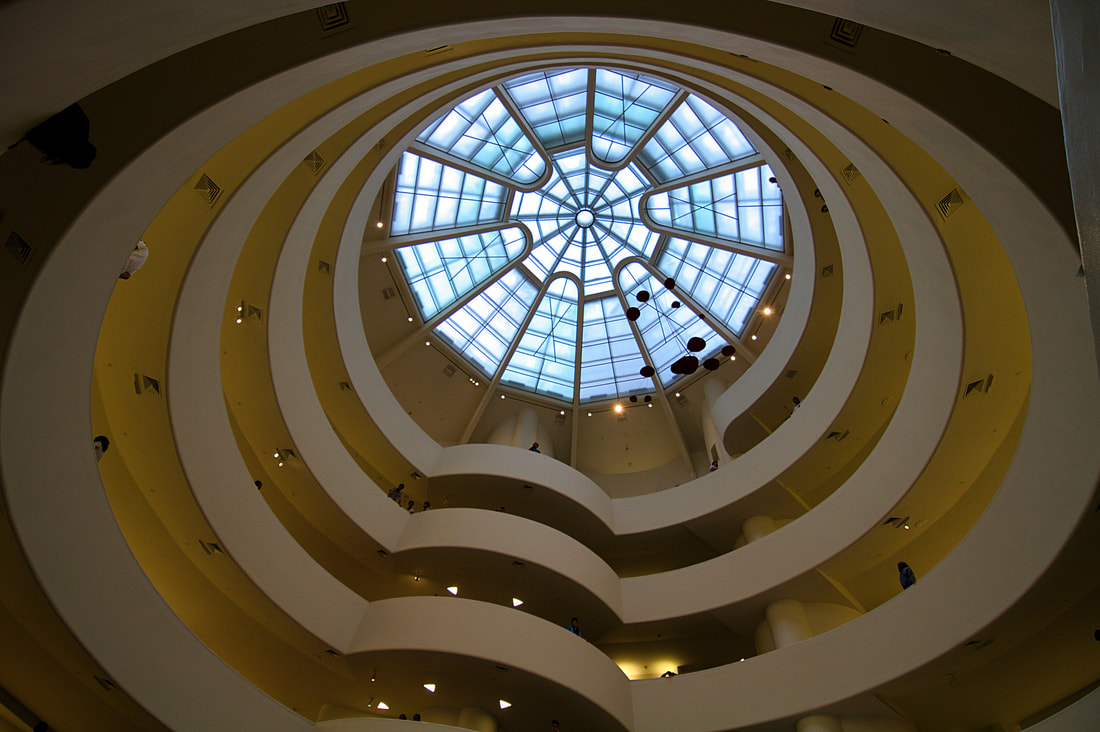 ​Then we move down to the Metropolitan Museum embellished with geometric symmetry, housing sacred art from the antiquities of all cultures, including an Egyptian temple.   Potentially the oldest  human-made structure in the United States has been placed behind it, an ancient Egyptian obelisk known as Cleopatra's Needle.   Western metropolises were obsessed with acquiring these obelisks for centuries, and they frequent the plazas of Rome, London and of course Paris.  Let's also note that the tallest structure in our nation's capital is also modeled on an Egyptian obelisk. 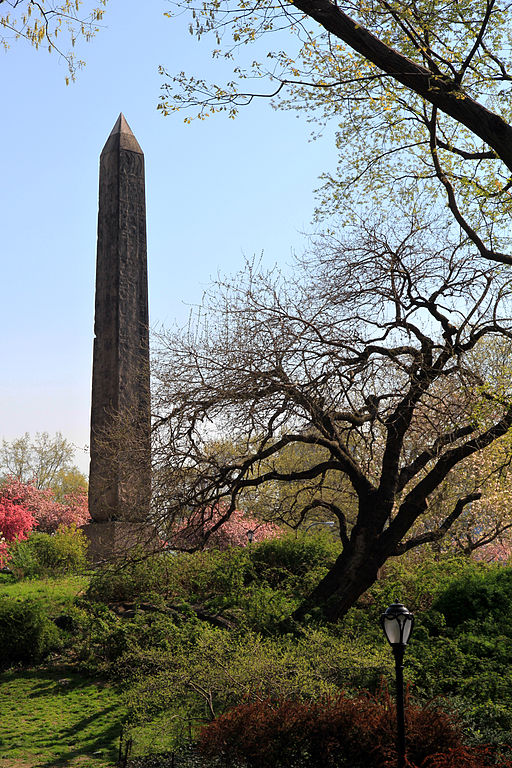 We can now walk south through the park, experiencing more Feng Shui at the Bethesda Fountain and the lake beside it.  Here, we are at the apex of an alignment stretching southward through the Park’s Mall, graced with elms and statues of literary figures, most notably Shakespeare and Sir Walter Scott.
​ 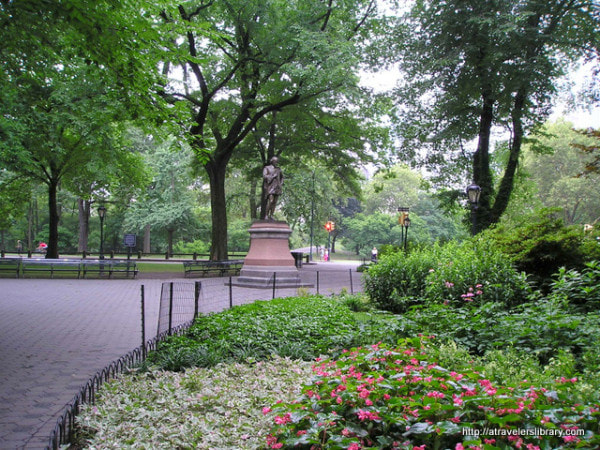 As walk further south to 59th Street, we will enter Grand Army Plaza where the Pulitzer Fountain and its horns of plenty sit across from the entrance to the Apple Store, a glass structure resembling a translucent Black Stone of Mecca. ​ 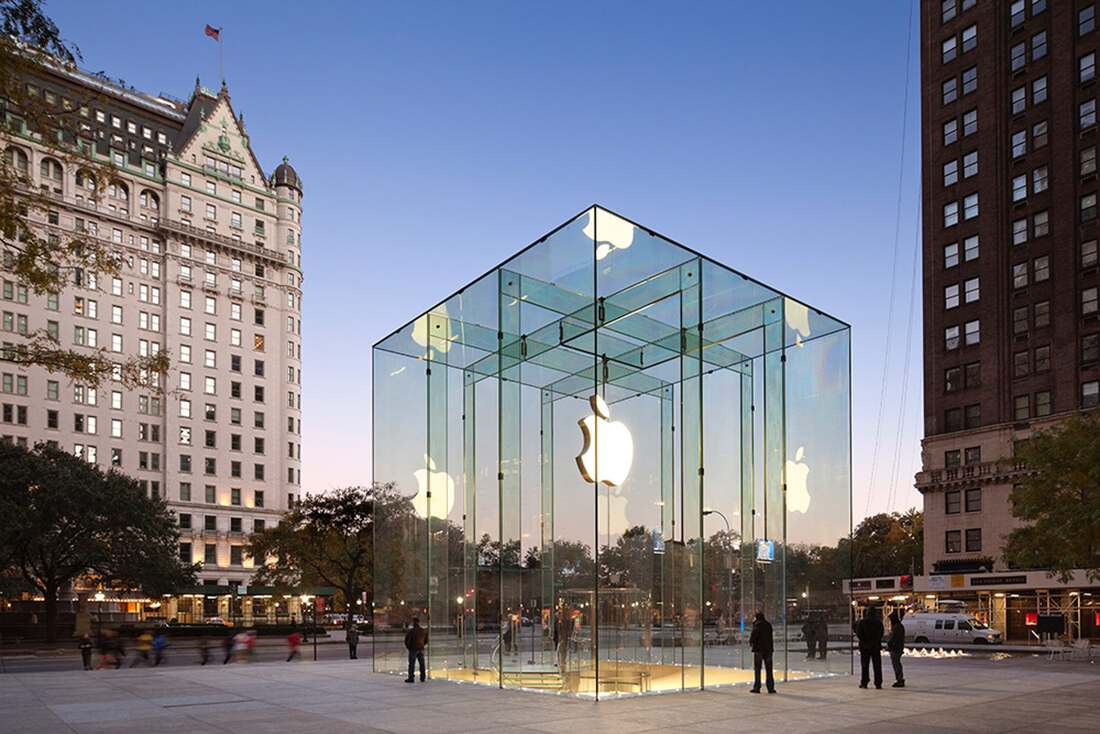 Down to 50th Street, where Saint Patrick's Cathedral stands across from Atlas, holding up the world.  If you stand behind Atlas, you can admire the spires through the webbing of the globe.   ​ 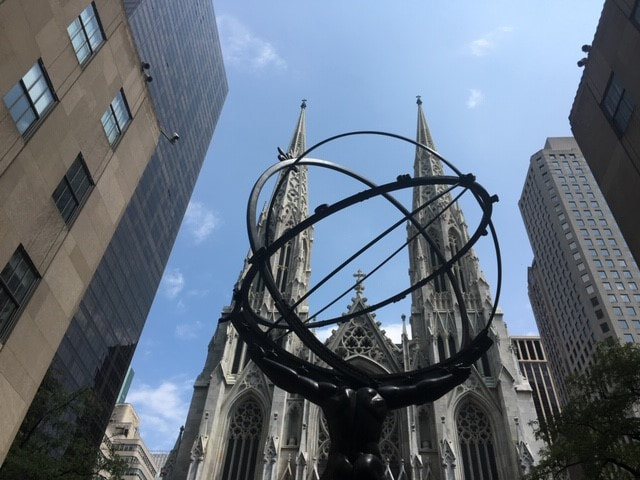 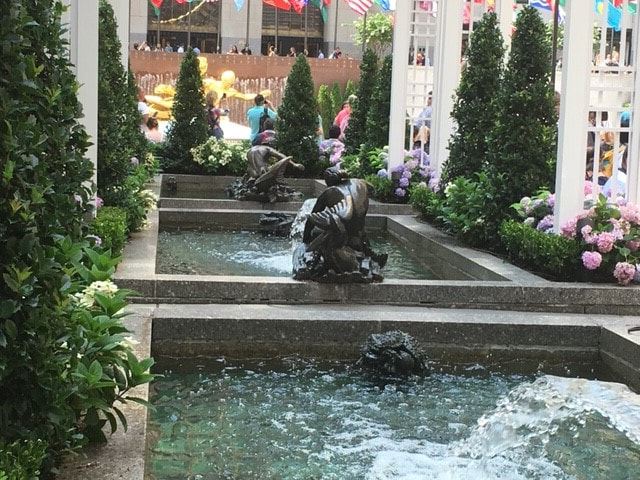 The breath of 42nd Street marks the site of the New York Public Library which stands on the site of a former reservoir designed like an Egyptian temple.   I would like to consider that the Beau Arts Library building is the modern world's equivalent of the Library of Alexandria that was the literary wonder of the ancient world.  While cyberspace may have obliterated the need for physical libraries, one need only to read or write  in the Rose Reading Room to understand how the geometry of this building contributes to the absorption of knowledge. 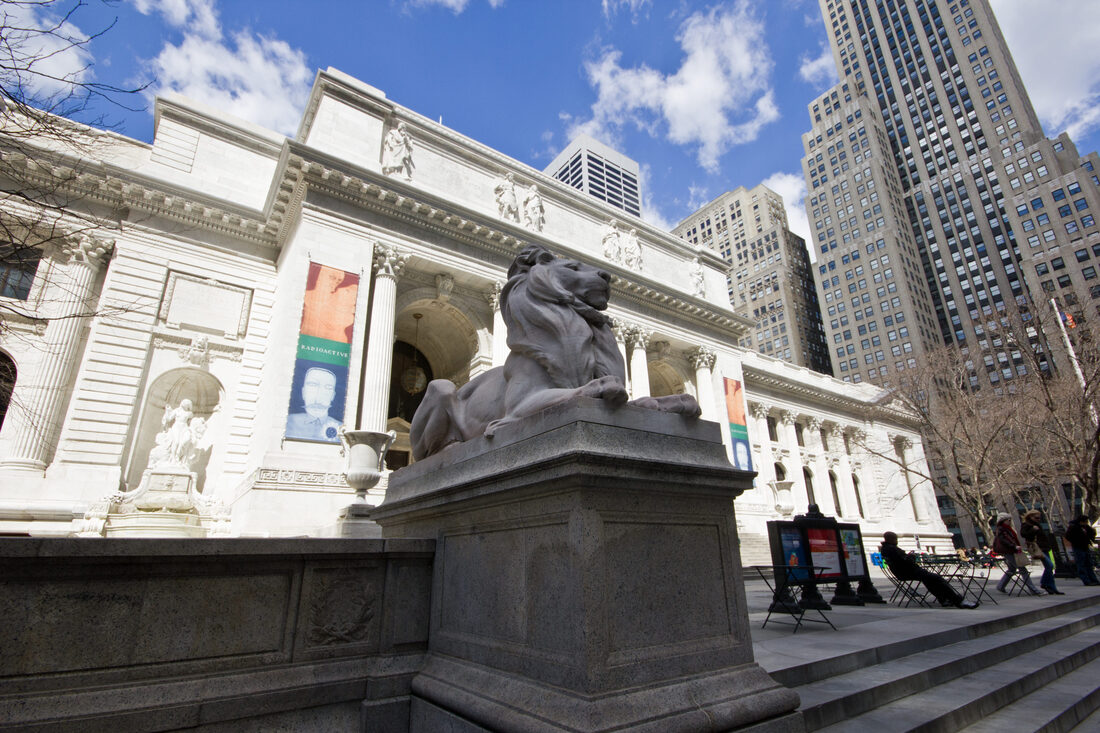 Now we arrive upon 34th Street and stand in the presence of the Empire State Building.  This can be considered a modern incantation of the Egyptian obelisk we observed earlier in this journey at a massive scale enabled by 20th Century technology, although we still can't understand how they built the pyramids at Giza ten thousand years ago.   Its beacon of light can be considered the modern equivalent of the lighthouse at Alexandria. 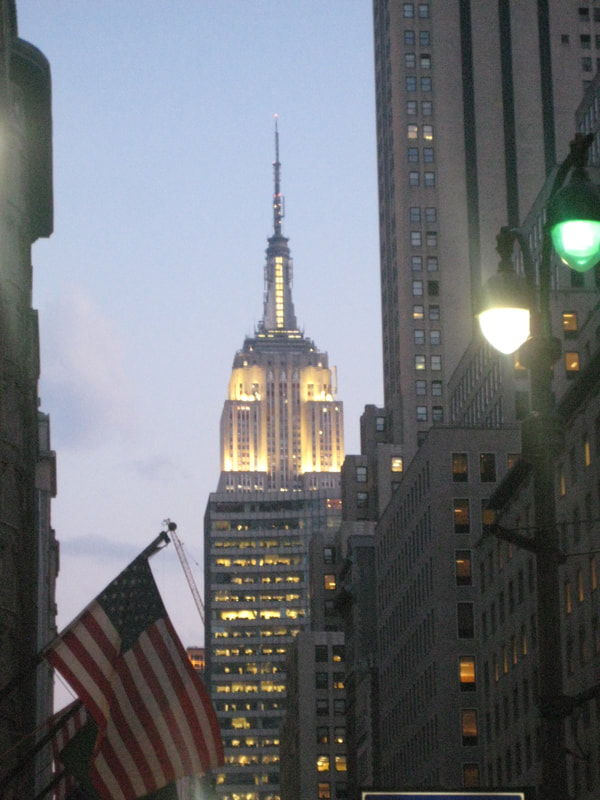 At 23rd Street, Fifth Avenue converges with the crooked path of Broadway.  The triangular Flatiron Building, a marvel when it rose in 1902, pierces the converging arteries like a ship sailing through steel icebergs.   Just South of the Flatiron is New York's World of Harry Potter Store.  Perhaps this location was picked for its propensity to breed new wizards. 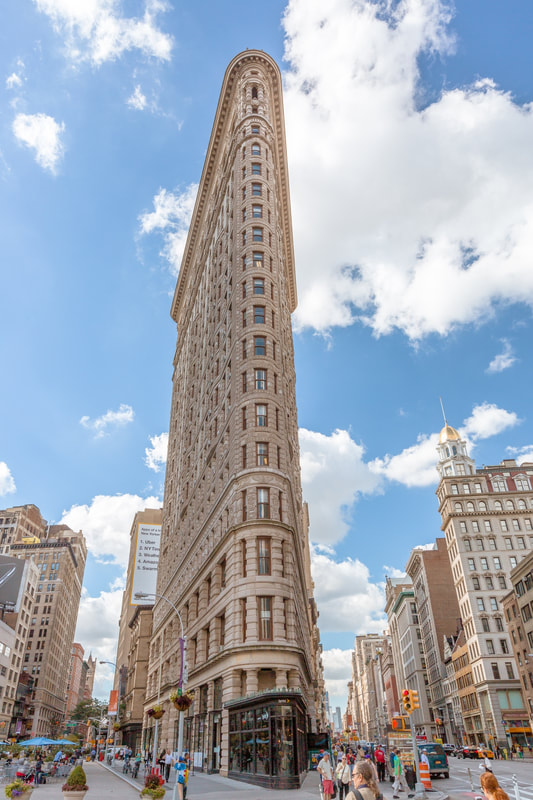 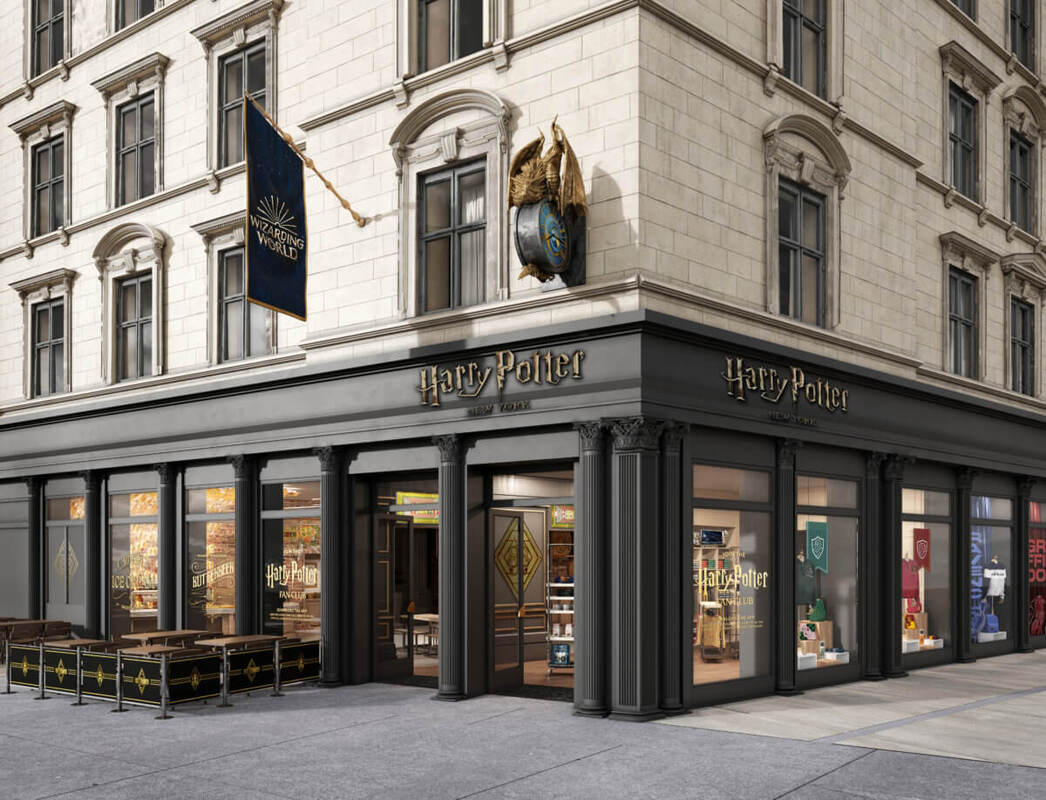 Fifth Avenue officially ends at the arch in Washington Square Park. Combined with the circular fountain behind it, this point in the axis gives the closest  reference to the grandeur of Paris' Grand Axis.  The site of the arch stands over old Minetta Creek, a major supply of water to the young city of the Eighteenth Century.
​ 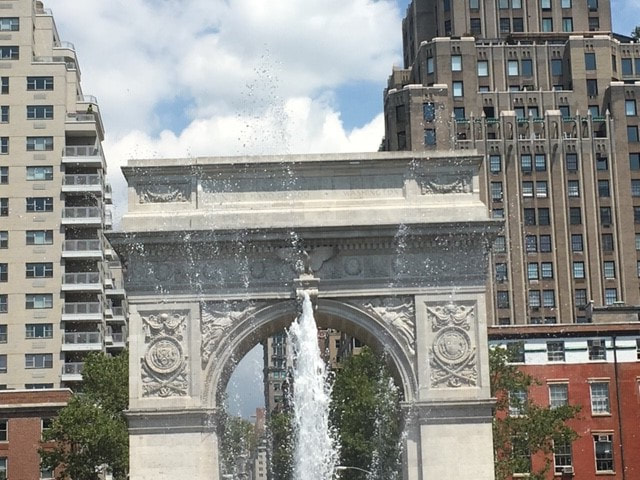 Fifth Avenue may end, but the alignment continues down to lower Manhattan’s World Trade Center. The Oculus Transportation Hub at Ground Zero has many similarities to the Guggenheim structure near where this journey started. Both were designed by eccentric, unwavering visionaries, in this case the Spanish Swiss architect Santiago Calatrava. Both feature expansive views skyward through geometries that enable the viewer to see music with their eyes.  Each September 11, the Oculus skylight retracts, and the building’s perfect alignment with the sun on that date enables a sweeping stream of light, bathing the structure in honor of those who died that day.  And for someone who venerates flowing waters, what can I say of the Memorial Pools? These Niagra-like flows and the thunderous music they create drive powerful synesthesia.  The names of the thousands who died that day come to life, and if we meditate quietly on the shapes, ratios and sounds of the streets and  structures that we've encountered in our journey from 88th Street, surely we can sense their spirits rising from the footprints of the original towers.  Evidently by a combination of accident and design, the city has ensured they'll always be remembered. 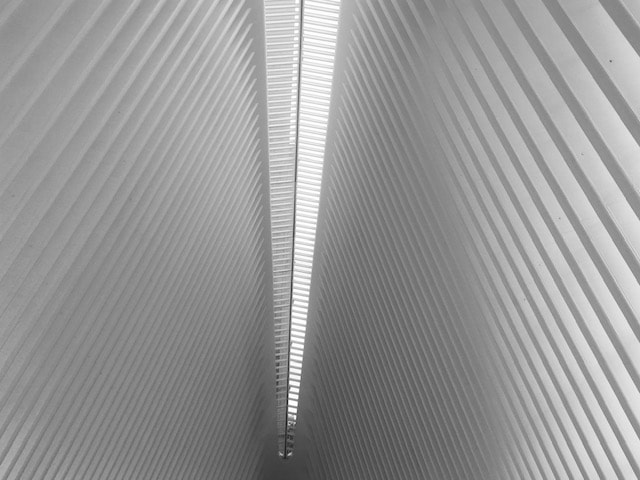 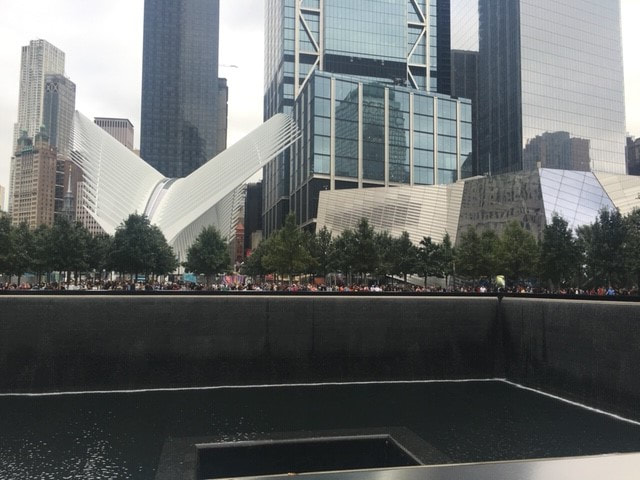